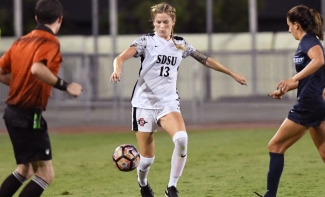 Aztecs run their MW record to 3-1 after road sweep

SDSU opened the game with the ball and pressed Boise State from the first tap. Its aggressiveness seemed to put the hosts on their heels and soon, San Diego State earned a corner kick. The attempt resulted in a Stacie Moran goal just 2:07 into the game. The third-minute goal was the first of the senior’s career and comes three games after she recorded her first assist of the season.

The Aztecs continued to control the pace, but the momentum slowly tilted back toward the middle and ultimately to Boise State, which forced the visitors into a handful of tense situations. Despite the raised blood pressure, San Diego State escaped the half unscathed and with its 1-0 lead intact.

When the action continued, the Broncos picked up where they left off, but the SDSU defense did not break. Anchored by goalkeeper Gabby English, who finished with a game-high five saves, many of the fine variety, the defense kept the home side of the scoreboard at zero. Keeping Boise State at bay, however, was not an easy task as Dani DeRosa headed the ball out of harm’s way with English out of the box on one occasion and Jordan Girman providing an equally impressive effort to clear the ball off the line. Moran was also dominant, thwarting numerous Bronco opportunities.

Similar to the first half, the momentum swung the other way, this time favoring the Aztecs. San Diego State spent the last 20 minutes of the game as the aggressors and ultimately was rewarded when Aliyah Utush sent a service into Chloe Frisch. The freshman corralled the ball in the box, made a couple touches and sent a strike into the left side of the net past Boise State goalkeeper Janelle Flores. The 85th-minute goal was the true freshman’s first of her career and provided SDSU with an insurmountable cushion. For Utush, it was her team-best third assist of the season.

Boise State finished the game with a 21-16 advantage in shots, but were outshot, 9-8, by the Aztecs in the second half. The Broncos were credited with six shots on goal with the Aztecs only putting four on target. SDSU, however, took more corner kicks (7-5).

Frisch led San Diego State with four shots and was one of five Aztecs to take multiple tries at scoring. Frisch, Moran, Nikolina Musto and Darcy Weiser, meanwhile, all had one shot on goal.

The Aztecs return to action on Friday when they play host to San Jose State. First tap at SDSU Sports Deck is set for 7 p.m. PT and the game will stream live on the Mountain West Network. Admission is free.