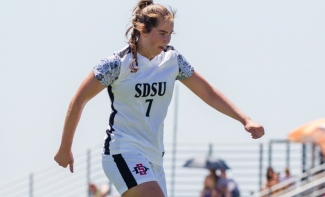 “I’m happy with the result, to get the win and to score three goals,” head coach Mike Friesen said. “I thought we played well and played together. It was a good group performance. I was a little disappointed to give up the goal so easily and not make them earn it a little more, but it was a good finish on their part. It was nice to see our team respond and score some nice goals at the end and create lots of good chances.”

The first 29 minutes was a feeling-out process that featured just three shots, the first two of which were harmless USD attempts and one from Mia Root that took an incredible effort from Amber Michel to stop.

As the game moved into the 30th minute, San Diego turned the ball over at midfield and it found its way to Esther Arnarsdottir, who beat a defender and ultimately beat Michel in a one-on-one situation to put the Aztecs up, 1-0.

The lead, however, was short-lived. After the Toreros put the ball in play, the action moved to the right side of the pitch where an SDSU miscommunication took place at the upper right corner of the box and the result landed on the foot of Summer Mason. The midfielder crossed the ball to the other side where Kelley Carusa scored the equalizer. San Diego State held the lead for a total of 17 seconds and went into halftime tied, 1-1.

Once the second half began, SDSU did not take long to move past USD. Seven seconds before the clock hit 50:00, Rachel Speros found herself alone 24 yards out and fed Arnarsdottir, who tickled the twice from 15 yards away.

San Diego State continued to dominate the ball as the clock moved toward 90 minutes. The Aztecs received an insurance goal in the 84th minute when Angela Mitchell connected with Mia Root, who posted her first career collegiate goal. Root led all players with four shots and three shots on goal.

At the end of regulation, San Diego State owned a 10-5 advantage in shots and put seven of its attempts on goal, compared to USD’s three. The Toreros, however, enjoyed a 7-4 cushion in corner kicks, with all seven coming in the second half.

The decision avenged last season’s 2-0 road defeat to USD and was SDSU’s fourth straight series win at home. San Diego State is now 5-0-1 all-time vs. San Diego at home and owns a 10-6-1 all-time record vs. the Linda Vista school.

SDSU will now prepare for a stretch of three straight away games, which starts next Friday, Sept. 8 at No. 14 Nebraska. The game will air on BTN Plus at 5:00 p.m.