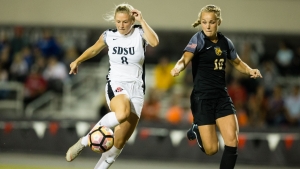 Aztecs were outshot 14-4 in the match

September 15, 2019 (Malibu) - Following one of its best overall performances of the season on Friday night against the University of San Diego where the San Diego State women’s soccer team produced 12 shots with six on frame, the Aztecs struggled to generate any offense in a 0-2 decision at Pepperdine on Sunday afternoon.

The Waves opened the scoring in the 10th minute.  They got a cross from the right side of the 18 past the back post.  With the defense all following the path of the ball, Shelby Little slipped in the back door. A pass back into the box resulted in a scramble in front of the net where Little slotted it inside the far post for a 1-0 Pepperdine lead.

The score remained the same thanks to a great play by Brooke Lisowski in the 29th minute.  Calista Reyes ran onto a long throughball from the midfield and got in on Lisowski one-on-one.  The senior from Los Gatos, Calif., charged off her line to cut down the angle and made a sliding save on Reyes’ shot from 13 yards out.

In the second half, the Aztecs (1-5-1) had their best opportunity to score in the 66th minute.  Lauren Dicus got open down the middle of the field and was joined by Rachelle Elve on the right wing.  A long pass from midfield, was just beyond Dicus’ reach at the top of the 18, but Elve was able to run on to it and took a shot across the front of the goal just beyond the back post.

Three minutes later, the Waves got the insurance goal from Hailey Stenberg.  She fired a turnaround shot from 22 yards out toward the far post.  The ball ricocheted off the post and in to make it 2-0, which would be the final score.

Chloe Frisch led the team with three shots and Elve had the fourth.  Lisowski made six saves in the loss.

Pepperdine’s offense was paced by Reyes who produced four shots, all on frame.  Kinsey Ehmann faced four shots, but none reached her line as she earned the clean sheet victory.

“I thought we were the better team in the first 30 minutes,” said head coach Mike Friesen.  “(Pepperdine’s) only real possession in our territory, in that time frame, produced their goal, but then we went away from our game plan, got tired and had a couple of key injuries.  Those factors forced us to play out of position and with some players who haven’t had a lot of field time this year.  But the bright side is that we are getting playing time for people we will rely on as we move into the conference schedule.  I think getting 12 days off, will allow us to get healthier and work on things we have struggled with so far this year.  The best part heading into Mountain West play, no one has won or lost a game.  We are all tied and if we can get healthy and work some things out, people will see who we are.”

The Aztecs have 12 days off before their next match.  The team returns to action on Friday, Sept. 27 with the start of Mountain West play.  They travel to Laramie, Wyo. to take on the Cowgirls and then return home on Sunday, Sept. 29 to host Colorado State.  Kickoff times are scheduled for 4 p.m. (MT) and 12 p.m. respectively.