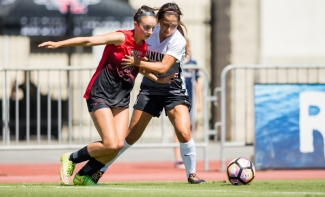 SDSU struggled to find its rhythm in the first half of a game that started at 11 a.m. PT, taking just one shot in 45 minutes. Its struggles were not limited to the offensive end as its defense allowed five first-half shots, but none officially coming on goal. Utah State, however, hit the frame twice in a half that finished in a scoreless tie.

As they have all season, the Aztecs made adjustments at halftime and its modifications proved fruitful almost immediately. In the 48th minute, San Diego State earned a corner kick, which was taken by Nikolina Musto. The junior transfer sent the ball into the box and Mia Root completed the sequence with her team-best fifth goal of the season.

Then just over five minutes later, one game after being doomed by an own goal, SDSU was the beneficiary of one itself, taking a 2-0 lead in the 53rd minute.

The Aztecs continued to build off the momentum of their two goals and attempted the game’s next five shots, four of which required Utah State’s Sara Cobb to make a save. Less than a minute after that fifth shot, one taken by senior Hailey Balma, the Aggies got on the scoreboard as a result of Ashley Cardozo’s strike from the top of the box. Bailee Hammond was credited with the assist.

With just over six minutes to play and holding a one-goal lead, the San Diego State defense took care of business and limited the Aggies to just one shot the rest of the way.

SDSU, which only had one shot in the first half, rebounded to take eight in the second. On the flipside, Utah State was held to a pair of shots in the final 45 minutes compared to its five in the first. Shots on goal, meanwhile, was 7-2 in favor off the Aztecs, who enjoyed a 4-3 advantage in cornerkicks.

San Diego State’s offensive attack was balanced as six Aztecs took at least one shot with half taking two shots. Musto and Aliyah Utush led the team with two shots on goal. Goalkeeper Gabby English, meanwhile, made only one save, which was on the Aggies’ final attempt in the 87th minute.

SDSU returns to action on Sunday when it plays at Boise State. The game is set to stream live on the Mountain West Network at noon PT.