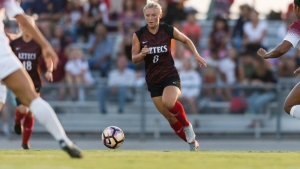 San Diego State got the equalizer in the 84th minute, but fell in the 100th

April 3, 2021 (Las Vegas) - After battling back from a one-goal deficit and producing the equalizer in the 84th minute, San Diego State women’s soccer came out on the short end of a 3-2 overtime decision to the UNLV Rebels on Saturday night at Peter Johann Memorial Field.

After a nearly 20-minute delay to the start of the game, due at least one of the officials not being at the field prior to the scheduled start time, the teams played the first four minutes with one linesman.

UNLV opened the scoring in the second minute.  Lourdes Bosch scored high to the right corner to put the Aztecs down 1-0.

Just over three minutes later, at the 5:09 mark, Anna Toohey got San Diego State (6-2-0) back level, with her fourth goal in the last four games. Jordan Girman played a perfect pass from the midfield, down the left side. Toohey ran right on to it and drove to the center of the box. As soon as the UNLV keeper Emberly Sevilla leaned to her left, Toohey shot back across her body and tucked it past Sevilla inside the near post.

From that point the half was played up and down the field. The teams combined for 18 shots, seven for SDSU, and each team put four shots on frame. However, San Diego State were flagged for offsides three times, with at least two of them with a two-on-one advantage for the Aztecs.

Coming out of the intermission, SDSU had the better run of play through the first seven minutes. But then UNLV (5-2-1) went back in front on a 53rd minute goal from Samantha Bailey. That strike gave them renewed energy for the next 20 minutes.

With ten minutes left in regulation time, San Diego State upped its intensity and at the 83:42 mark it paid off with the equalizer. San Diego State picked up a loose ball in the midfield which was played on to Frisch on the left side. She drove to the end line and pounded a shot high inside the far post. It was her fifth goal of the year and ties her with Toohey for the team lead.

The score remained the 2-2 through the first nine minutes of overtime and with less than 30 seconds to go in the period, UNLV’s Hevani Haunga got the game winner.

The teams combined for 41 shots, 19 from San Diego State, and each team put 10 on frame.  SDSU was flagged for offsides five times.

The Aztecs offense was led by seven shots from Toohey and four from Frisch. Emma Gaines-Ramos produced three shots and Sarah Brocha had two. Taylor Moorehead, Laura Fuentes and Clair Watkins took a shot each. Keeper Alexa Madueno made seven saves and her record now stands at 6-2-0.

UNLV’s Jules Dominguez had a team-high four shots and Sevilla had eight saves in the win.

The three goals surrendered to UNLV are the most the Aztecs have allowed in a game this season.

Anna Toohey scored a goal in her fourth consecutive game. The last to do that is Laura Fuentes, who did it last season in the four games from Oct. 11-20, 2019.