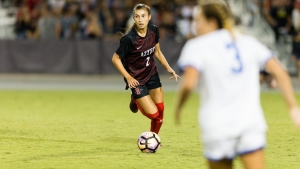 September 30, 2018 (Fresno) - San Diego State allowed a goal in the 87th minute and ultimately dropped a Mountain West road game to Fresno State, 2-1, Sunday afternoon at Soccer & Lacrosse Stadium. The Aztecs return home with a split of their road trip and fall to 4-7-1 overall and 2-1-1 in the MW.

The Bulldogs (2-8-2; 1-2-1 MW) struck first, scoring the 35th minute when Emma Chivers found the back of the net for the first time this season. Ele Avery and Danya Gutierrez were credited with assists. The goal held up as the opening period came to an end and was the finishing touch on a frame in which the hosts outshot SDSU, 10-4.

SDSU made adjustments at halftime and it paid off in the 64th minute when Phoebe Leitch leveled the score after taking a pass from Sarah Broacha. The goal was Leitch’s team-high-tying second of the year. Broacha, meanwhile, collected her team-high-matching second assist.

The Aztecs were able to put pressure on the Fresno State backline as the game moved toward the finish line, but they were unable to push across a goal. As for the Bulldogs, they were able to create some chances in the final minutes, leading to a pair of tense moments. After coming up empty, Fresno State’s persistence paid off as Chivers supplied the game-winner in the 87th minute.

SDSU’s halftime maneuvers resulted in the Aztecs doubling their shots in the second half (8-4) compared to the first, while limiting the Bulldogs to eight attempts of their own. For the game, however, the Aztecs were outshot, 18-12, and put two fewer on target (9-7) than Fresno State.

Gabby English finished with a game-high seven saves, her most in a Mountain West game this season. Her season high is eight, which she accomplished at UC Davis.

The Aztecs return to action on Friday when they play host to Utah State at 7 p.m. Admission is free and the contest will air on the Mountain West Network.