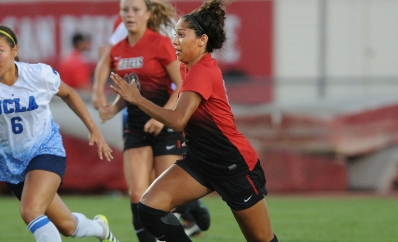 August 18, 2017 (Pasadena) - San Diego State, which fielded a lineup the featured six first-time starters, dropped its season opener Friday night at UCLA, 5-1. The decision puts the Aztecs at 0-1 on the year, while the ninth-ranked Bruins move to 1-0.

SDSU kept the Bruins off the scoreboard for the first 36:35 until a bit of misfortune hit. With UCLA on the attack, the Aztecs went to clear the ball, but the attempt was deflected by a Bruin and the result went right to Hailie Mace, who was wide open and put the home side ahead, 1-0.

San Diego State, however, nearly answered with a goal of its own when, after play resumed, Nikolina Musto centered a pass into the box to an oncoming Angela Mitchell. The senior’s sliding shot, unfortunately, veered to the left of the goal and the score remained unchanged going into halftime.

UCLA doubled its advantage just over five minutes into the second half when Mace lofted a ball to the far post and found a Jessie Fleming, who jump-kicked her shot off the crossbar and into the net.

Trailing 2-0 with just under 40 minutes to play, the Aztecs kept working to get on the scoreboard, but came up empty each time. The defense, meanwhile, held the Bruins at bay until Julia Hernandez scored with just under 28 minutes left in the game. Then with 18:14 remaining in the contest, Hernandez had her penalty kick saved by Gabby English, but got the rebound and scored her second of the evening to put UCLA ahead, 4-0.

San Diego State managed to get on the scoreboard in the 74th minute when Aliyah Utush, who was taken down in the box, found the back of the net on a penalty-kick attempt. The PK goal was the first of Utush’s career, who entered the season as SDSU’s returning leader in scoring.

UCLA ended up adding another goal with just over four minutes to play, a successful attempt by Claire Winter to provide the final margin.

Utush had three of SDSU’s five shots with the other two coming from Mitchell (1) and Stacie Moran (1). Utush was also responsible for all three of the Aztecs’ shots on goal. English made six saves on the night.

The Aztecs return to action on Sunday when they play host to UC Davis in their home opener. The noon PT game atop SDSU Sports Deck is slated to stream live on the Mountain West Network. Admission is free.