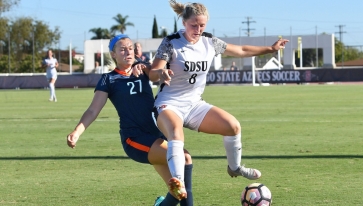 Aztecs fall to 2-5 on the season

September 14, 2018 (San Diego) - San Diego State allowed a goal in the 81st minute and could not find the equalizer in the final nine minutes to fall, 1-0, to Pepperdine on a hot Friday afternoon at SDSU Sports Deck. The loss sent the Aztecs to 2-5 on the year, while the Waves moved to 3-5.

SDSU played its most complete first half of the season, but came away empty after 45 minutes. The Aztecs were aggressive on offense, creating numerous chances. Pepperdine, meanwhile, was held in check outside of the first two minutes of the game when it earned a pair of corner kicks.

Mia Root had San Diego State’s first good look of the afternoon in the 10th minute, only to have her attempt stopped by Brielle Preece. The Aztecs pushed the pace the entire half and it nearly paid off in the 43rd minute when Yasmin Ahooja’s shot from 10 yards out hit the upper V. Despite controlling the possession, the half ended in a scoreless tie.

Pepperdine began to create some momentum toward the end of the first half and they carried it into the second frame. The Aztecs found themselves on their heels, but like most of the season, their defense was stout. The defensive effort helped created an offensive opportunity in the 75th minute when SDSU forced a turnover deep in the attacking third, leading to Darcy Weiser finding Malia Kaleohi out in front of the goal. The sophomore, however, sailed her shot over the frame.

The game appeared to be headed to overtime as the game moved into the late moments. Devyn Gilfoy, however, centered a pass to Joelle Anderson, who had her lofted shot deflected up and over the outstretched Gabby English to score the game’s only goal. SDSU attempted to find the back of the net with what was left on the clock, but was unsuccessful.

Gabby English had a game-high six saves, giving her 199 for her career. She is five saves away from moving into a third-place tie in the San Diego State record book.

“I thought the first 25 minutes was some of the best we have played all year. Then we got out of our element of playing really simple and allowed Pepperdine to get a little bit of the ball and create some chances. That carried over to the second half where we came out a little bit flat and they did of really good job of winning balls and creating some pressure on us. It was unfortunate for the goal that went in, a deflection that went over our goalkeeper, but to be fair, they created some chances before that. I think we have to finish our chances. We had a chance at our six-yard line to tuck the game away and win it and that is just part of being a young team.” – head coach Mike Friesen

San Diego State returns to action on Sunday when it plays host to No. 8 UCLA at 6 p.m. The first 250 fans will receive a free SDSU Soccer t-shirt. Admission is free at SDSU Sports Deck. For those cannot make the game, the showdown will be streamed live on the Mountain West Network.