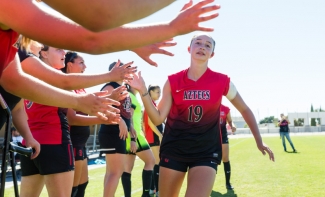 October 28, 2017 (Alberquerque) - Freshman Mia Root provided the game-winning goal in double overtime to push San Diego State past New Mexico on the road Friday night 4-3 at UNM Soccer Complex. The victory helped the Aztecs secure the No. 2 seed and a quarterfinal bye into the semifinal round of next week’s MW Championship.

In the waning moments of the second overtime with the game tied at 3-3, Root drew a foul on the Lobos with less than 10 seconds remaining. After New Mexico set a wall in preparation for a 15-yard free kick, it was deemed too suffocating, forcing the referee to move it back. The extra breathing room was all the freshman needed as she found the back of the net with four seconds left to send the Aztecs into a frenzy.

The decision moved San Diego State to 10-7-2 on the year and 7-2-2 in the Mountain West, which was good for second place in the league standings and a bye next week, preventing it from playing in Tuesday’s quarterfinal game at the conference tournament. SDSU also tied a school record with its seventh straight 10-win season, matching an identical stretch from 1993-99. During the previous run, the Aztecs produced 93 victories. Friday’s game was win No. 94, with at least one more opportunity to add to the total.

San Diego State found itself in a double-overtime position after taking an early lead and being forced to rally late. The Aztecs moved in front of the Lobos (12-7; 7-4 MW) just 56 seconds into the game when Chloe Frisch fed Rachel Speros, who was at the top of the box and fired her shot into the top right corner. The goal was Speros’ second of the year and the assist was Frisch’s third of 2017.

UNM found the equalizer in the 27th minute when Eileen Zendejas beat SDSU goalkeeper Gabby English off a pass from Casey Murphy. But just over four minutes later, however, the Aztecs earned a corner kick and Aliyah Utush sent a ball to the far post where Stacie Moran knocked the ball to Angela Mitchell, who touched the ball past Lobos keeper Emily Johnson. Mitchell’s 31st-minute goal was her third of the year and the assist was Moran’s second of the season.

The Aztecs carried a 2-1 lead into the second half, but the advantage eventually evaporated. Claire Lynch put away a deflection in the 53rd minute and was followed by Emily Chavez in the 65th to lift New Mexico to a 3-2 lead.

San Diego State, which played with a controlled urgency all game, kept at it despite a pair of deflating goals. The Aztecs’ pressure finally paid dividends as Utush took a ball off the end line and fed it back to an onrushing Moran, who put her shot on goal, but the attempt bounced off Johnson and then off a Lobo defender into the net for an own goal.

Both teams played a scoreless 12-plus minutes to push the game into OT and neither team could find the golden goal, moving the contest into an extra 10 minutes. The outcome looked as if it would end in a draw before Root’s heroics took place. The goal was Root’s team-best ninth of the year.