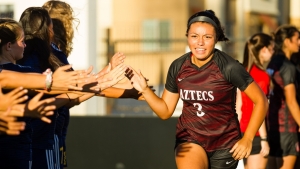 Moorehead was the beneficiary of a critical mistake by SJSU goalkeeper Paige Simoneau. The Spartans’ senior goalie turned the ball over outside the box and Moorehead was there to take advantage of the miscue, scoring from 40 yards out with just 64 seconds left in the second half.

The scenario was similar to SDSU’s season opener vs. New Mexico State when Moorehead provided the game-winner. In that contest, Moorehead entered the game in the 76th minute and scored nine minutes later. Tonight, her presence was felt much earlier as she entered the 90 seconds prior to scoring her second game-winning goal of the year.

Prior to Moorehead’s heroics, the teams could not solve one another. The first half was evenly played with San Diego State unable to connect on a pair of nice chances late in the frame. The second half featured more of an SJSU attack, but SDSU forced the hosts into a handful of tough looks that did not require Gabby English to make a save.

The first English save, however, was from point blank-range in the 77th minute, which proved pivotal in a game that nearly required overtime. The junior finished with two stops with the other coming 13 seconds before the final horn.

San Diego State has produced a clean sheet in its last four road/neutral games dating to last season against Mountain West competition. Since allowing a goal at New Mexico in the 2017 regular-season finale, the Aztecs have gone 406:38 without allowing a goal to a conference foe away from home.

Taylor Moorehead scored her second goal of the season and is the first Aztec to do so this season. Entering tonight, SDSU had eight different players score one goal.

The Aztecs will head south to the Central Valley where Fresno State awaits. The teams will share the pitch on Sunday at noon with the game streamed live on the Mountain West Network.