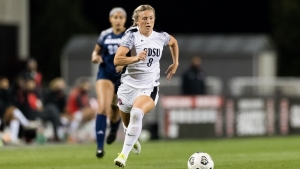 Chloe Frisch’s 51st minute strike was all the Aztecs needed in a 1-0 victory. The win eliminates Boise State and Fresno State from West Division contention.

April 9, 2021 (Boise) - The San Diego State women’s soccer team went into Boise with its destiny in its own hands and took a big step toward winning the West Division of the Mountain West with a 1-0 decision over Boise State at the Boas Tennis/Soccer Complex.

With the victory, SDSU has eliminated the Broncos and Fresno State from the race for the West Division race and depending on how UNLV does at Nevada this evening, could be celebrating the title on its trip to Reno.

The Aztecs improve to 7-2-0 on the year and have 21 points. UNLV enters the day with 16 points and needs a victory against the Wolf Pack to keep its hopes alive. With one game left in the regular season Boise State and Fresno State are on 13 and 16 points, respectively, and cannot catch San Diego State.

SDSU dominated the run of play from the opening whistle to the final horn. For the game, the Aztecs outshot Boise State 16-5, including 11-3 in the first 45 minutes.  San Diego State put four shots on goal to Boise State’s one and had five corners to the Broncos one.

In the first half, SDSU produced several scoring opportunities and two dangerous chances. Sophomore Kiera Utush had the first dangerous chance off a free kick at the 25:07 mark. After junior Anna Toohey was taken down just outside the 18, the Aztecs lined up for the free kick. Utush took it and hammered a shot which ricocheted off the crossbar.

Then in the 33rd minute, after a scramble for a free ball in the box, Toohey picked it up and had a wide-open chance, but her attempt went just over the bar. Despite SDSU controlling the game in the first 45 minutes, the teams went to the locker room tied 0-0 at the half.

Finally, at the 50:34 mark, the Aztecs broke through. Keeper Alexa Madueno grabbed a Broncos cross and booted the ball to midfield where Toohey picked it up and laid it off to Frisch. Frisch then drove down the right side, angled to the center of the field and from the top of the box placed a perfect strike into the upper left-hand corner of the goal for a 1-0 lead and the eventual game winner.

With the lead in hand, San Diego State continued to press its advantage, never let Boise State build any momentum, and walked away with the 1-0 decision.

Keeper Alexa Madueno had only one shot reach her line and easily turned it away. She improved her record to 7-2-0 this season.

The Broncos were led with two shots by Morgan Miles. Sydney Smith made three saves in the loss.

The Aztecs held Boise State without a shot on goal until the 66th minute and without a corner until the 80th minute.

Chloe Frisch scored her team-leading sixth goal of the season and is now tied for the league lead in goals.