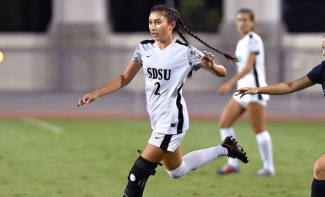 “Tonight was a great way to start the conference season,” head coach Mike Friesen said. “It was great to get a lot of people rest to get ready for Sunday’s game vs. UNLV. We scored a few goals, but it would have been nice to get a few more. We scored five, but only three of them counted due to a couple of offsides on our part. We’re just excited to get the conference season started in the right way.”

Freshman Mia Root got the Aztecs on the board rather quickly, scoring in the 20th minute. After SDSU provided a couple tense moments for Nevada goalkeeper Lauryn Horstdaniel, Stacie Moran fed Chloe Frisch, who located Root to help her put away her team-leading fourth goal of the season.

San Diego State kept the pressure on the Wolf Pack for the remainder of the half, which featured one of the called-back goals, and the persistence paid off in the 43rd minute. Freshman Sarah Broacha found herself on the left side of the pitch and sent a lofty shot from 20 yards out that found the far upper corner of the cage. The goal was the first of her career.

In the second half, the Aztecs kept attacking, but could not find the back of the net until late in the game. The second nullified goal of the night featured Hailey Balma’s blast that ricocheted off the crossbar with the rebound going to Darcy Weiser, who put the ball past Horstdaniel. An offsides call took the goal off the scoreboard, but the duo reconnected in the 82nd minute for the third goal of the game. For Weiser, it was her first goal of the season as was the assist for Balma.

SDSU enjoyed an 18-4 advantage in shots, including a 10-1 effort in the first half, and a 6-2 edge in shots on goal. San Diego State also attempted nine corner kicks, compared to the Wolf Pack’s one.

Eight Aztecs attempted at least one shot with six taking multiple shots, led by Weiser’s five. Root and Weiser took a team-high two shots on goal. Goalkeeper Gabby English, meanwhile, was not tested, but made two saves on the night and recorded her second shutout of 2017. English now has 10 career shutouts to move into a seventh-place tie in program history with Elizabeth Judkins (1994-95).

San Diego State will return to action on Sunday afternoon when it plays host to UNLV (8-2; 0-1 MW). First tap is set for noon PT and the game will air on the Mountain West Network.  ECM will have full coverage of this game.  You can follow @ECMagSports on Twitter for live updates.

Sunday’s game will mark the first SDSU Kids Club Day. The Kids Club costs $30 and those interested can find more information here: http://www.goaztecs.com/ot/kidsclub.html. As part of Kids Club Day, all current members can participate in a poster-making station, play in inflatables, and receive postgame autographs from the Aztecs.