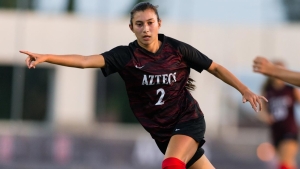 Aztecs get goals from Broacha, Leitch in loss

September 7, 2018 (San Diego) - The San Diego State women’s soccer team dropped a tough 5-2 decision to the University of San Diego in a non-conference road match Friday night at Torero Stadium. With the loss, the Aztecs slip to 2-4 on the year, while the Toreros raise their record  to 3-2-1.

Things started ominously for SDSU after ceding the first goal of the evening, as USD’s Minah Ghazizadeh found the back of the net in third minute to give the host school a 1-0 lead it would never relinquish.

Later in the half, the Toreros extended their advantage to 2-0 in the 34th minute when Kelsi Dantu’s shot to the left post caromed off a defender into the cage.

Shortly before intermission, the Aztecs caught some much-momentum when Sarah Broacha deposited the ball into the right corner of the goal from 10 yards out with just five seconds left, trimming the deficit to 2-1.

SDSU nearly got the equalizer in the first minute of the second half; however, Taylor Moorehead’s shot was corralled by USD goalkeeper Amber Michel and the Aztecs never threatened again.

Stung, the Scarlet and Black yielded three straight goals in a 22-minute-span to Milan Moses, Summer Mason and Dantu, whose second strike of the night put the Toreros in command, 5-1.

SDSU closed out the scoring in the 88th minute when Phoebe Leitch headed in a cross from Chloe Frisch to provide the match its final margin.

Moorehead and Frisch led the Aztecs with two shots on goal apiece, while Dantu and Mason finished with three each to pace the Toreros.

Defensively, Gabby English played full-time at goalkeeper for SDSU, making six saves on the night, while her counterpart Michel recorded five stops before giving way to Allie Jara in the 79th minute.

The Aztecs resume their non-conference schedule next week when they play host to Pepperdine on Friday, Sept. 14 at SDSU Sports Deck. The contest will be streamed live via the Mountain West Network on GoAztecs.com.