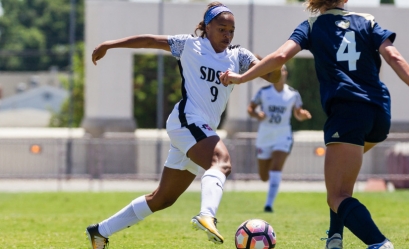 August 25, 2017 (San Diego) - San Diego State surrendered a goal with eight seconds left in the first overtime period to fall at home to Arizona State 2-1 Friday night. The loss dropped SDSU to 1-2 on the season, while the Sun Devils leveled their record to 1-1.

“It was a disappointing end to the game to give up a goal in overtime, but they presented some challenges for us with their formation, their 4-4-2 diamond tight, in the first half,” head coach Mike Friesen said. “We struggled a little bit to play out of that and deal with some of their runners in behind. They were pretty direct and so we decided at halftime to make a quick change and I thought that tactical change really changed the momentum in the game.

“I thought we played really well in the second half, had a lot of the ball and created some good chances, but we just didn’t tuck anything away. Unfortunately, we left it to overtime and they had the quality at the end to get a goal. We just made a couple of mistakes to give them the opportunity. Overall, I’m pleased with the game, but we have to regroup and get ready for Sunday.”

The game-winner came in the 100th minute when Jazmarie Mader and Olive Jones teamed on the left side of the pitch to find Jessica Raybe, who positioned herself out in the front of the net. From there, Raybe put one of her two shots on the night past goalkeeper Gabby English to send the Sun Devils into celebration mode.

The goal came after a second half that was controlled by the Aztecs from the moment the clock hit 45:01. SDSU’s relentlessness in the period finally paid dividends when, in the 68th minute, Aliyah Utush found Angela Mitchell, who found an open corner to record her first goal of the season and tie the game at 1-1.

San Diego State needed the equalizer after a first half that featured a Natalie Stephens goal in the 42nd minute. The ASU assists when to Christina Edwards and Amanda Jones.

When looking at the statistics, the game appeared even despite Arizona State dictating the pace in the first and San Diego State repaying the favor in the second half and overtime. After 99 minutes and 52 seconds of action, the Sun Devils outshot the Aztecs, 10-9 (3-3 in first half, 6-6 in second half), but the teams were tied with four shots on goal apiece. SDSU, however, attempted more corner kicks, 3-2.

The Aztecs return to action on Sunday night when they play host to Long Beach State at 7 p.m. PT. Admission is free and the game will be streamed on the Mountain West Network.