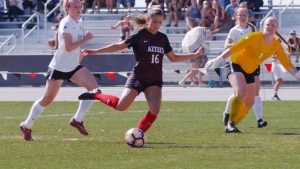 October 21, 2018 (San Diego) - San Diego State scored four goals in a 15-minute window in the second half to cruise past Air Force, 5-0, on a warm Sunday afternoon at SDSU Sports Deck. With the win, the Aztecs improved to 6-9-3 overall and 4-3-3 in the Mountain West.

SDSU controlled a majority of the first half, routinely spending time in its attacking third of the field. The Falcons, at times, threatened the hosts, but the Aztecs were able to avoid a letdown defensively. As the contest approached halftime, Chloe Frisch made a run down the left side and centered a pass to Darcy Weiser, who one-timed her shot past Jennifer Hiddink, giving San Diego State the lead with less than four minutes left in the frame.

Once the action resumed, so did the Aztecs’ relentlessness on offense. After experiencing a couple of lulls in the first half, San Diego State went back to the way it started the game and pressured Air Force (2-8-6; 1-6-3 MW) from the opening tap.

The Aztecs’ aggressiveness paid off in the 65th minute when Laura Fuentes brought the ball to the top of the box and fed Phoebe Leitch to her left. The sophomore took a rhythm touch and curled her shot into the upper right corner of the cage.

Soon after San Diego State doubled its advantage, the Aztecs tripled it with another goal 2 minutes, 33 seconds later. This time, Fuentes fought off a couple of defenders, dribbled through the box and put her shot past the feet-first sliding Hiddink.

Leading comfortably, SDSU continued to push forward with the finish line in sight. Just before the clock hit 74:00, Weiser found herself at the top of the box and entered into the teeth of the Falcons defense. The junior put a couple of moves on the Air Force defenders, but none more important than her last move, which put Hiddink in a bad position, leaving a wide-open net for Weiser to score her second goal of the day.

Malia Kaleiohi provided the final tally of the day in the 80th minute when she dribbled to the top of the box, made one move and fired from 20 yards, slotting her right-footed attempt into the upper right corner. The goal was the first of her career.

The Aztecs’ offense featured 22 shots with 11 coming on target and three corner kicks. As good as it was on the attack, the SDSU defense was equally good, limiting the Falcons to 10 shots. Kate Hart, who was making her first career start for San Diego State, made six saves and was never threatened. She also posted the team’s fifth shutout of 2018.

Darcy Weiser posted the Aztecs’ first multi-goal game of the season. The two-goal performance was the first of the junior’s career and gave her three goals on the season. She entered the 2018 campaign with two career goals.

San Diego State now has three players with a team-high three goals on the season. Phoebe Leitch led the team in the category for a mere 2 minutes, 33 seconds until Laura Fuentes joined her atop the leaderboard. Then the duo was joined by Weiser less than 10 minutes later.

Chloe Frisch picked up her third assist of the season on Weiser’s first goal of the game. The sophomore is now tied with Nikolina Musto for the team lead.

“Huge performance, much-needed today in terms of getting five goals. We couldn’t ask for anything more in this point of the year when we desperately needed a win. We needed a dominant performance and I thought we got all those things. I thought we were gritty, I thought we moved the ball exceptionally well, created chances and finished chances. It was overall an amazing performance.”- head coach Mike Friesen

The Aztecs return to action on Friday when they play host to New Mexico on Senior Night. First tap at SDSU Sports Deck is slated for 7 p.m. and the contest will stream live on the Mountain West Network. Admission to the regular-season finale is free.