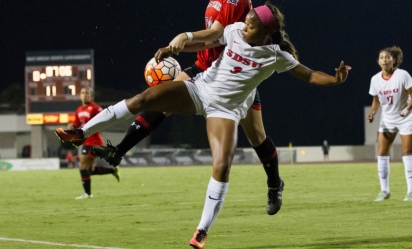 The Aztecs struck first in the 32nd minute when San Diego State took possession at midfield where the ball was played to Hedda Regefalk off to the left flank. The senior fed it to Aliyah Utush, who sent the ball diagonally into the box from 25 yards out and split two defenders. The pass grazed off one of the two Fresno State players and Angela Mitchell found the back of the net from three yards out for her second goal of the season.

The Bulldogs answered with a goal of their own three minutes later when a ball was kicked out to the wing and back to the top of the box where it was corralled and touched to Peyton Cline, who provided the equalizer. The 12-yard goal, which was assisted by Myra Delgadillo and Anna Crawford, was the first allowed by San Diego State in its last 518:27.

In the second half, SDSU controlled the pace of play and continually put pressure on the Bulldogs’ defensive unit. The Aztecs, however, were unable to find the go-ahead goal and the game moved to overtime where the trend continued. San Diego State put itself in positions to score, but could not tickle the twine, giving SDSU its first regular-season tie since 2014.

Utush had a game-high seven shots, including a game-high-tying two on goal, and recorded her team-leading third assist. Victoria Barba also had two shots on goal and four for the game. Regefalk, meanwhile, picked up her second assist of 2016 and added one shot. Gabby English had three saves in net.

SDSU continues its road trip when it plays at San José State on Sunday. The noon PT game will stream live on GoAztecs.com and the Mountain West Network.