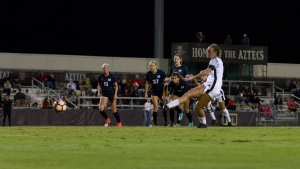 Aztecs relinquish pair of leads and settle for tie

After 59 minutes of scoreless action that featured San Diego State controlling the pace, the home team finally caught the break it needed when Chloe Frisch stole the ball from the Aggies and drove down the left flank. The sophomore then entered the box and drew a penalty, setting up a Mia Root penalty kick. Frisch’s classmate took advantage of the opportunity and scored her first goal of the season in the 60th minute.

SDSU carried its lead into the 72nd minute only to have Utah State earn corner kick. Ashley Cardozo sent her attempt into the box where Imelda Williams waited and scored in front of the net through a maze full of people.

With less than 20 minutes left in the second half, the Aztecs went back to work looking for the go-ahead goal. Once again, Frisch found herself in the middle of the action, this time driving the middle of the pitch and feeding Veronica Avalos just outside the box on the right side. The sophomore attempted to put her shot on net, but her strike hit the raised hand of Jaylen Hinckley, setting up another PK. This time, Laura Fuentes cashed in her first career goal in the 77th minute.

Utah State wasted little time in leveling the score, drawing a foul on SDSU in the 80th minute and lining up its free kick on the same side as their corner kick in the 72nd minute. Cardozo was at it again, taking the kick and finding Mealii Enos for the successful header.

The second half ended in a deadlock as did the next 20 minutes of overtime as each team earned one point toward the league standings.

“We definitely created a lot chances tonight to win the game and just didn’t take our chances. I think we pushed them in their end, created a lot of opportunity and earned a couple of penalty kicks to go up both times. To relinquish the lead twice is really disappointing and to give away two open headers on free kicks is also really disappointing. It is something certainly we can’t afford to do the rest of the way, so we’re going to have to learn from that and keep getting better. Overall, I thought we played better attacking soccer than we have the last couple of weeks and we need to build off that.” – head coach Mike Friesen

San Diego State plays host to Boise State on Sunday at 2:30 p.m. The first 300 fans will receive a free pair of SDSU sunglasses. Admission is free or fans can watch the game on the Mountain West Network.