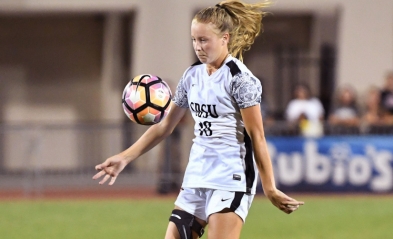 September 8, 2017 (Lincoln, Neb.) - Rachel Speros scored 19 seconds before the final horn in double overtime to lift San Diego State to a 2-1 road victory over No. 22 Nebraska at Barbara Hibner Stadium on Friday. The win evened the Aztecs’ record at 3-3, while the Huskers watched their record fall to 5-2.

“Tonight was a big-time team win,’ head coach Mike Friesen said. “We fought very hard. I loved the mentality to come back after giving up a soft goal at the end of the half. I am so proud of their hard work.”

Both teams played a fairly even first half and were headed toward halftime locked at 0-0. But in the 44th minute, Nebraska’s Meg Brandt fired a shot from 10 yards out and SDSU goalkeeper Gabby English got a piece of the ball, but it redirected into net to put the home side ahead.

After intermission, the Aztecs wasted little time leveling the score. Mia Root took a pass from fellow true freshman classmate Sarah Broacha in the 49th minute and successfully put her 7-yard strike past Aubrei Corder. The goal was the second of the season for Root and the second in as many games. For Broacha, it marked her first career point and assist.

For the rest of the second half, Nebraska continued to put pressure on the Aztecs, totaling 11 shots, but the SDSU defense did not break. Its effort helped keep the Huskers off the scoreboard as the game moved to overtime.

In the first extra period, neither team created much offensively, taking only one shot apiece. The same could be said in the final OT session as Nebraska attempted just one shot before Nikolina Musto found Aliyah Utush, who crossed it to Speros for the winner. The goal was Speros’ first of the season and the assist was No. 2 on the year for Utush, who leads the team with six points.

Nebraska finished with a 17-8 advantage in shots, but only enjoyed a 5-4 cushion in shots on goal. Root had four of those eight SDSU attempts and half of its shots on goal. English, meanwhile, made four saves in net.

The Aztecs, who evened their record vs. nationally ranked teams this season to 1-1, now travels to Columbia, Mo., to face Missouri on Sunday night. Game time is set for 6:30 p.m. CT/4:30 p.m. PT on SEC Network+ and WatchESPN.