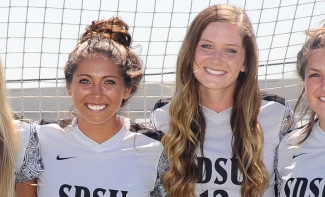 Moran is the program’s first player to garner first-team all-region accolades since Haley Palmer in 2013, and is the first Aztec to be a multi-year all-region performer since Palmer in 2012 and 2013. The Alta Loma native was a second-team pick a season ago.

On the field this year, Moran was a key player on SDSU’s backline, which helped the Aztecs shutout eight opponents, including both at the Mountain West Championship en route to the league title. In conference play, Moran and the defense was stout, blanking five foes and allowing one goal or fewer in nine of 11 MW games.

The 2017 first-team all-Mountain West defender was also a threat on offense, tallying one goal (a game-winner) and two assists for four points. She took 19 shots, which was the fifth most on the team and tops amongst defenders, putting six on goal.

As for Utush, she picked up her first career all-region accolade after an outstanding season that saw her finish with nine goals, seven assists and 25 points. The MW second-team forward led the team in assists and points, and fell one goal shy of tying Mia Root for the SDSU lead. She also took a team-high 54 shots and put an Aztec-best 32 on target, four of which ended in game-winning goals.

A native of Rocklin, Utush ended her career with a bang, scoring seven goals in the final seven games of the season and producing at least one point in seven of her last 11 outings.

Her effort over two games at the conference tournament in Las Vegas might be one of the best in MW history. In the semifinals vs. Boise State, Utush netted the winner in the 48th minute as the Aztecs were victorious, 1-0. Two days later in the final vs. New Mexico, the senior turned in a hat trick, scoring in the 58th, 76th and 82nd minute, leading to a 3-0 win. Her three-goal effort was the fourth in MW conference tournament history and the second in the title game, which was first accomplished in 2016 by teammate Victoria Barba.

This is the second straight year and eighth time in school history San Diego State has had at least two all-region honorees. Barba (second team) and Moran (third team) were recognized in 2016.