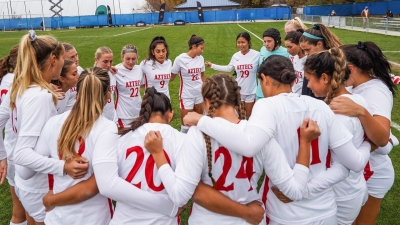 November 1, 2021 (Boise) - San Diego State’s women’s soccer team, the 3-seed, surrendered a goal in the 23rd minute and was forced to compete a player down for the final 39 minutes in a 0-1 loss to 6-seed Boise State in the quarterfinals of the 2021 Mountain West Championship on Monday afternoon.

In a game that was a tale of two halves, Boise State made the most of its best opportunity in the first 45 minutes, scoring at the 22:20 mark. The Aztecs enjoyed the better run of play in the second half but were unable to convert on its best chance.

Outshooting San Diego State on the scoresheet 8-to-4 in the first half, Boise State grabbed a 1-0 lead in the 23rd minute on a goal from Morgan Miles.

On an initial shot from Morgan Stone, who was on the right side of the box, Aztec keeper Alexa Madueno attempted to deflect the shot over the crossbar.  However, the ball did not go over the crossbar, but hit it and it came down just outside the far post. Miles headed it to the turf and then shot it inside the far post and past Madueno. It was the only shot of the nine that reached her line that the sophomore from Woodland, Calif., was unable to stop.

Coming out of the intermission, the game got a bit chippy. Four Broncos were issued four yellow cards, but the biggest impact on the game came at the 50:18 mark, when Aztec Anna Toohey and Bronco Abby Bivens got tangled up on the touchline. The pair grappled in an attempt to gain control of the ball. The outcome was that Toohey was sent off with a straight red card, but Bivens was only shown yellow. So, for the final 39-plus minutes, the Aztecs were a player down.

Despite being outmanned 11 players to 10 in the second half, San Diego State produced seven shots to Boise State’s five and put four of its attempts on frame compared to the Broncos three.

The most dangerous chance the Aztecs had came in the 59th minute.

Hope Paredes served the ball toward the far post off a corner kick. Denise Castro rose up and headed toward the goal and what looked like the equalizer. However, it hit the inside of the post and then ricocheted to Malia Kaleiohi. Kaleiohi’s shot from five yards out was just wide of the mark.

San Diego State would attempt four more shots in the final 30 minutes but would not have a better chance to score and lost 1-0.

In her final game in an Aztec uniform, Kaleiohi led the team along with freshman Trinity Coker, with three shots and two shots on goal.  Castro produced two shots and Kiera Utush, Jessica Sanders and Taylor Moorehead attempted one shot each.  Madueno, as mentioned earlier, had eight saves.

San Diego State had defeated Boise State in each of its last three meetings, including a 2-0 win earlier this year on the Sports Deck. The last time the Aztecs lost to the Broncos came in the championship match of the 2019 Mountain West tournament.