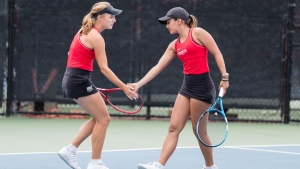 Aztecs have never lost to the Falcons in their 14 meetings

April 11, 2021 (San Diego) - The San Diego State women’s tennis team completed a weekend sweep of their Mountain West opponents with a 4-0 victory over the Air Force Falcons Sunday at the Aztec Tennis Center.

SDSU started off strong in doubles play as junior Regina Pitts and sophomore Cécile Morin earned a swift 6-2 victory on court two over Alex Kuo and Ksenia Vasilyev. Air Force responed with a 6-4 win on court three as Sydney Fitch and Shailla Alda topped seniors Abbie Mulbarger and Nnena Nadozie. In exciting fashion, senior Tamara Arnold and junior Alicia Melosch secured a victory on court one with a 7-6 (10-8) win over Meredith Jones and Isabella Flodin to give the Aztecs the doubles point.

With the doubles point in hand, the Aztecs went on to dominate in singles play. Nadozie topped Kuo 6-2, 6-1 on court three while Morin bested Alda in No. 4 singles, 6-4, 6-1. Melosch once again acted as the clutch point for the dual-match win, surpassing Becerra on court five 6-2, 7-5.

The Aztecs continued their dominance against the Falcons, now 14-0 all-time in dual matches with Air Force.

“I am very proud of the Aztec women today,” head coach Peter Mattera stated. “They came to play against a very tough Air Force team on Senior Day. Our number one doubles team was in particular very important today as they clutched the tiebreaker to give us the doubles point, which gave us some momentum going into singles play. Everyone played well (ins ignles action) and it was a good win by the Aztecs. We hope to duplicate this on the road coming up next weekend.”

The Aztecs hit the road for the second time this season, meeting Colorado State and Wyoming in Fort Collins, Colo on Saturday, April 17 and Sunday, April 18, respectively. Both dual matches are set to begin at 1 p.m. MT/noon PT.