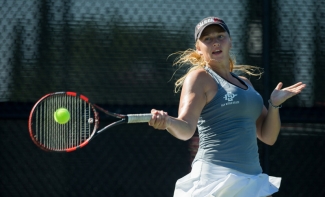 The Aztecs got off to a strong start with three victories in doubles action. In the red bracket, senior Paola Diaz and freshman Abbie Mulbarger dominated CSUN’s Alicia Dinkelmeyer and Emma Roenholt, 6-1.

Aztec junior Jenny Moinard and sophomore Mia Smith took it to 7-5 against Maria Paula Medina and Milena Baigorria of UTEP in the gold draw.

In the round robin bracket, junior Magda Aubets and sophomore Berta Acero came up with a close win over CSUN’s Arpe Bagumyan and Lisa Nosenko, 7-6(4).

SDSU continued to battle through singles, as freshman Nnena Nadozie took Tamara Culibrk of SJSU to three sets in the red bracket and claimed a 2-6, 6-4, 6-3 victory. Aubets was less fortunate in the bracket, falling in three sets to Emilia Occhipinti of GCU, 3-6, 6-3, 6-3.

In the black draw, Mulbarger struggled against SJSU’s Miyo Kobayashi, falling 6-0, 6-2, but Moinard knocked off her opponent, Medina of UTEP, in a 6-2, 6-3 match.

Acero was the sole Aztec playing in the white bracket, where she had a close battle in the first set, but finished off CSUN’s Bagumyan in the second set, 7-6(5), 6-0. Smith, in similar fashion, kept her win over UTEP’s Alisa Morozova to two sets with a 7-6(4), 6-1 victory in the gold draw.

Diaz faced a close match against Monika Van de Vondel of CSUN, but preserved an edge and claimed a 2-6, 6-4, 6-1 victory in the blue bracket.

Day two of the tournament continues tomorrow at the Aztec Tennis Center and begins with doubles play at 9 a.m., immediately followed by singles action.

SDSU Fall Classic I – Day One