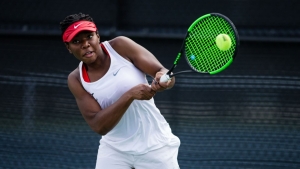 Aztecs fall in first match against a ranked opponent this season

February 26, 2019 (Los Angeles) - San Diego State women's tennis faced its first ranked opponent Tuesday afternoon in No. 32 Southern California, who defeated the Aztecs 5-2 at the Marks Tennis Stadium. Despite the loss, sophomores Abbie Mulbarger and Nnena Nadozie captured wins in singles play, the latter of whom claimed her first career win over a ranked opponent.

SDSU began the afternoon with a swift loss in doubles play, first on court one where freshman Alicia Melosch and Nadozie fell 6-1 to Angela Kulikov and Rianna Valdes. USC’s Danielle Willson and Sydney Van Alphen clinched the doubles point for the Trojans on court three where they topped Agustina Rimoldi Godoy and Magda Aubets 6-3, leaving the match on court two unfinished.

USC’s dual clinch came soon after with three immediate wins in singles, but the Aztecs fought back in the final few matches to put points on the board. Senior Jenny Moinard was blanked by Kulikov 6-0, 6-0, in the top-seeded match, while junior Mia Smith fell 6-0, 6-3 on court three to Ana Neffa. Sitting at 3-0, the Trojans clinched a victory with a win by Valdes over freshman Shakhnoza Khatamova 7-5, 6-3 on court two.

Despite her doubles loss earlier in the day, Nadozie tallied her third straight singles victory with a 6-4, 6-2 win over No. 120 Becca Weissmann in the fourth seed. A few minutes later, Mulbarger polished off a two-set victory of her own, going 7-5, 6-4 against Van Alphen on court six. Melosch was making moves towards a comeback on court five against Willson, but ultimately dropped her decision in the 10-point tie break 6-2, 6-7 (4), 10-8.

Sophomore Nnena Nadozie records her first career singles win over a nationally-ranked opponent in the dual. The win was her third straight in nine days.

The Aztecs, now 6-5 on the season, take an intermission from competition and return to the Aztec Tennis Center Friday, March 8 when they kick off a seven-match homestand against Middle Tennessee State.