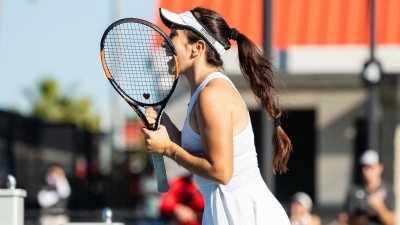 The victory is the fifth in a row for the Aztecs, their longest win streak since a 15-match win streak late in the 2013 campaign and guarantees SDSU will end the day in a tie atop of the league standings.

“This was a really great effort today by the Aztecs," San Diego State head coach Peter Mattera said. “Playing on the road without a couple players against a tough conference opponent is not easy. We played with heart and soul and tremendous confidence in singles.

SDSU was without seniors Bunyawi Thamchaiwat and Regina Pitts due to injury. Thamchaiwat is a perfect 9-0 this season playing at the top of the singles lineup and has teamed with Tamara Arnold at number one doubles to record an 11-2 record. Thamchaiwat is currently ranked 83rd nationally in singles and along with Arnold is 51st in the doubles rankings.

Meanwhile, Pitts owns a 5-3 record in singles action, all at the number four spot, and has played with various partners to see doubles action in 13 of SDSU’s 14 matches entering the day, posting a 6-5 mark with two no decisions.

The Aztecs shuffled all three of their normal doubles teams due to the injuries and found themselves in a hole by dropping the doubles point. The bright spot was on court three, where Arnold and senior Agustina Rimoldi Godoy posted a 6-2 win over Raquel Villan Pereira and Jovana Babic. This marked Rimoldi Godoy’s season debut in doubles.

The Aztecs were not as fortunate on courts one and two. Next off at number one doubles, Alba Pedrero Galindo and Lara Marco Mas defeated Nnena Nadozie and Alicia Melosch 6-2. The Aztec pair last played as partners in a competitive match on Feb. 20.

The doubles point was decided on court two, where Irena Muradyan and Rozalina Youseva outlasted Cécile Morin and Julia Jordan 7-5. The Aztec pair was playing together for the first time this season and the loss gave an SDSU opponent a team point for the first time in four matches (SDSU had won its three previous matches by identical 4-0 scores).

San Diego State dropped the doubles point for just the fourth time this season, but was able to bounce back to record four straight victories in singles play to secure the win and improve to 11-4 overall and 3-0 in conference play. The Spartans dropped to 4-9 overall and 0-3 in league action. This marked the first time this season that the Aztecs won a match without claiming the doubles point.

Arnold got San Diego State off to a strong start at the top of the singles lineup, tying the team score after a 6-2, 6-1 victory over Galindo. Arnold improved to 11-3 in singles play this season and has won six consecutive matches. She is a perfect 3-0 when playing atop of the lineup, the position typically held by Thamchaiwat.

The Aztecs took the lead for good, when Jordan posted a 6-3, 6-2 win on court five over Marco Mas. Although Jordan is frequently in the lineup, due to San Diego State’s team dominance and quick matches, the win marked her first victory since Feb. 12.

At number two singles, Nadozie disposed of Muradyan 6-2, 6-2. This gave San Diego State a 3-1 team lead. For Nadozie, it was her third consecutive singles win and she improved to 8-4 in the calendar year.

The Aztecs clinched the team win on court five, where Melosch rallied from a set down to defeat Youseva 0-6, 6-1, 6-3. It was the sixth straight victory for Melosch, who is tied with Arnold for the team-lead n singles wins with 11.

San Diego State remains in Fresno to face Fresno State on Sunday at 2 p.m. PT. The Bulldogs entered a Saturday afternoon home match against UNLV, with a 12-3 overall record and a 2-0 mark in Mountain West play.