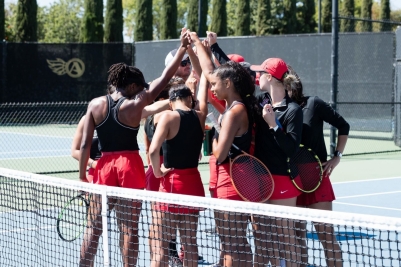 The Aztecs were without Bunyawi Thamchaiwat and Cecile Morin but battled hard throughout the entirety of the match. San Diego State stayed with the Falcons throughout all three doubles matches and pushed multiple singles matches to decisive third sets on Friday morning.

"We lost a tough one to a very solid Air Force team. They were in their comfort zone at home and indoors and we were not. Well done by them to get the win today. We are hoping to get back to full strength for the conference tournament next week in Tucson, as we were without two players today."

Air Force took the doubles point in two tightly contested doubles matches. At the No. 1 court Tamara Arnold and Regina Pitts took on Vivian Glozman and Karina Choo, but fell 6-4. At the No. 2 slot Nnena Nadozie and Alicia Melosch took on Sydney Fitch and Isabella Flodin but also came up just short, falling 6-4 in their match, giving Air Force a 1-0 lead heading into singles play.

The Aztecs faced some tough sledding in singles play. Arnold, who was bumped up to the No. 1 slot in the absence of Thamchatiwat, battled in the first set of her match, falling 7-5 and then fell 6-2 in the second set. Regina Pitts went back and forth with Alexis Odom at the No. 3 spot on Friday morning, where she fell in the first set 6-3 and then fell in the second set 6-4.

Nnena Nadozie, playing at the No. 2 slot for the third time this season, battled over three sets in the decisive match against Sydney Fitch of Air Force. Nadozie took the first set with a hard fought 6-4 win, but dropped the next two sets 6-1, 6-1.

Up Next: The Aztecs will wrap up their Mountain West regular season slate with a neutral site match against New Mexico tomorrow at 1 p.m.