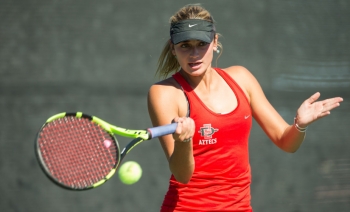 The day got off to a tough start with the Aztecs falling in the first two doubles matches, giving the Titans the doubles point. At the No. 3 spot, Freshmen Alli Valk and Mia Smith could not get past Fullerton’s Masako Makiba and Danielle Pham, 6-3. The second-seed duo of Kennedy Davis and Paola Diaz faced a similar fate, falling to Sarah Nuno and Karla Portalatin in a 6-3 decision, handing the first point of the day to the Titans.

Singles decisions came just as fast as doubles, with Valk succumbing to her opponent, Portalatin, in the fourth spot, 6-1, 6-4. In the No. 6 match, freshman Berta Acero could not shake Pham, falling in a 6-2, 6-2 decision. With Fullerton sitting at 3-0, Alexis Valenzuela edged out SDSU junior Jana Buth, 6-2, 6-4, at the top of the order and the Titans clinched the victory.

With its first loss of the season, San Diego State travels north tomorrow with a 1-1 record to face the UC Irvine Anteaters in Irvine, Calif. First serve is set for noon.