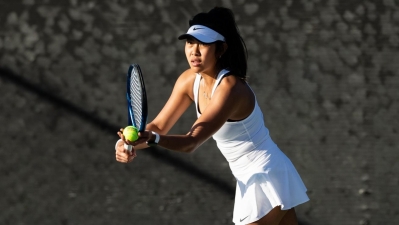 Following the victory played on the UNLV campus, San Diego State improves to 13-5 overall, 5-1 in league action. The Aztecs have won seven of their last eight matches and have not suffered a loss while fielding a full lineup in more than a month (March 7). With five conference wins this season, the Aztecs have matched their highest conference victory total since 2013.

Colorado State, which entered the day tied with SDSU for second place in the conference standings, fell to 10-7 and 4-2 in conference play.

“This was a really great win today against a very competitive Colorado State team,” San Diego State head coach Peter Mattera said. “It was a really good college tennis match from start to finish. We came with really good energy in doubled and that point and the momentum that came with it was huge. There were some terrific singles matches and needed to play very well to get the three singles points.”

San Diego State won the doubles point for the second time in as many days. At the top of the lineup, Thamchaiwat and Tamara Arnold, ranked 74th nationally, improved to 13-2 with a 6-1 victory over Somer Dalla Bona and Sarka Richterova.

The Aztecs clinched the point when Alicia Melosch and Cécile Morin made quick work of Lucia Natal and Tracy Guo 6-2 on court number three.

Singles action was tightly contest on many courts, with three of the six matches splitting the first two sets. San Diego State posted victories in two of the three matches that were decided in straight sets.

At number one singles, Thamchaiwat, ranked 67th nationally, defeated Dalla Bona 6-1, 6-2. The senior improved to 10-0 this calendar year but posted her first victory in a dual match since March 12. The win game the Aztecs a 2-0 advantage.

Colorado State got on the scoreboard at number two singles. Radka Buzkova handed Arnold a rare loss, defeating the Aztec senior 6-1, 6-3. Arnold, who has posted 12 victories on the season, suffered just her second loss when playing in the second position.

The Aztecs stretched their advantage back to two points at number six, with Julia Jordan defeating Kotsyuba 7-6 (7), 6-4. Jordan provided SDSU with its first victory at number the number four singles position since March 23.

SDSU clinched the match when Regina Pitts, who along with Thamchaiwat missed the two matches last weekend due to injury, disposed of Natal in three sets 6-3, 4-6, 6-3.