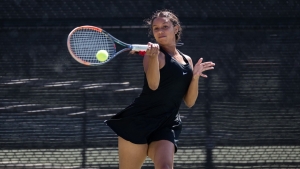 Due to health and safety precautions, the Aztecs played with four student-athletes and were forced to forfeit their No. 3 doubles match and the No. 5 and No. 6 singles matches.

In doubles play, the first time duo of junior Regina Pitts and Cécile Morin fell 6-2 to Oregon’s Martinez and Kahliani on court one. On court two, the Ducks’ team of Tjen and Mould topped senior Abbie Mulbarger and freshman Alexandria Von Tersch Pohrer 6-1.  After the Ducks captured the doubles point, they secured a 3-0 lead before singles play began.