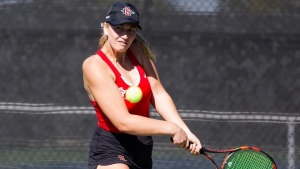 April 14, 2019 (San Diego) - San Diego State women’s tennis dropped a second straight match this weekend with its 4-1 loss to CSUN on Sunday afternoon. The Aztecs were only able to get one win in for the day before CSUN captured the clinching point.

The Aztecs faced another loss in doubles, finishing just two of the three matches against CSUN. On court three, senior Magda Aubets and sophomore Abbie Mulbarger suffered a 6-1 defeat by Sibel Demirbaga and Emma Roenholt, while CSUN’s Monika Van de Vondel and Skyla Alcon claimed a 6-4 decision over No. 70 Nnena Nadozie and Alicia Melosch.

In singles action, freshman Shakhnoza Khatamova captured San Diego State’s sole point of the day with her 6-3, 6-1 win over Van de Vondel in the top seeded matchup, but senior Jenny Moinard handed the Matadors their second point of the afternoon with a 6-4, 6-0 loss to Alcon on court three.

In the second seed, junior Mia Smith struggled to overcome Jolene Coetzee, ultimately falling 6-3, 6-2 in the dual. The Matadors were able to halt play on courts four and six with a clinching point by Demirbaga in the fifth seed, where she topped Aubets, 6-2, 6-2.

The Aztecs drop a fourth straight doubles point in Sunday’s loss to CSUN.

Freshman Shakhnoza Khatamova earned a perfect 2-0 record in singles play for the weekend.

San Diego State (12-9, 3-1 MW) hosts its final regular season match on Thursday, April 18 when they welcome back UCSD. The final home contest also marks the team’s Senior Day. First serve against the Tritons is set for 2 p.m. at the Aztec Tennis Center.