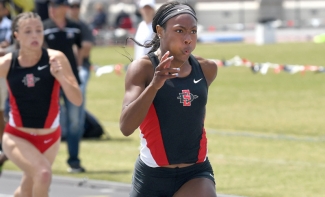 April 24, 2018 (San Diego) - Ashley Henderson has been named the Mountain West Track Athlete of the Week, the conference office announced Tuesday afternoon. Henderson took first in the 200 (22.66) and second in the 100 meter dash (11.06) at the highly competitive Mt. SAC Relays last Saturday. Both of Henderson’s times were the second best in the nation over the weekend.

Both of Henderson’s times are the fastest in the Mountain West this season and top ten in the nation. Her time of 22.66 in the 200 meter dash is also the best on the NCAA West Qualifying List.

Her time of 11.06 in the 100 meter dash was just 0.05 seconds off the school record she set last season and a SDSU record for a senior. The runner that bested her on Saturday, USC’s Twanisha Terry, set the all-time collegiate record for a freshman (10.99).

This marks the third straight week an Aztec has taken home the Mountain West’s weekly honor. Lisa-Anne Barrow won for her performance in the long jump two weeks ago and Rochene Smith was recognized last week after winning the 100 meter dash at the Triton Invitational with a time of 11.50.