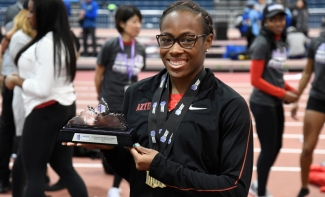 She recently finished second in the nation in the 200 meter dash with a school record time of 22.41. When she finished the race her mark was a new facility record (Texas A&M) and was just 0.01 seconds off the collegiate record set 10 years ago. However, Harvard's Gabrielle Thomas bested Henderson with a time of 22.38 just a few minutes later in the second heat, which set a new collegiate record.

She won both events at the Mountain West Indoor Championships and now has been a conference champion 11 times in her career, a SDSU record. Henderson has also accumulated a combined eight First Team All-American honors.

Henderson and the Aztecs are hosting the 40th annual Aztec Invitational this week (March 22-24).