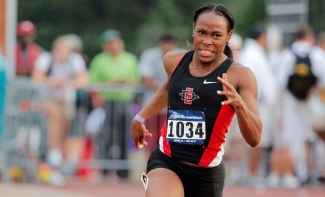 Henderson wins second award in as many tries this year

Henderson won both the 60-meter dash and the 200 to lead the Aztecs Saturday at the New Mexico Team Invitational. Henderson, who remained undefeated on the season in individual events against collegiate competition, won the 60 in a time of 7.30 seconds (second place was 7.43). The altitude adjusted time of 7.33 ranks as the fastest in the MW this year and tied for the 18th fastest in the country.