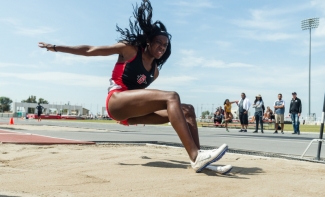 Barrow had the second best long jump in school history

April 10, 2018 (San Diego) - Lisa-Anne Barrow was named the Mountain West Field Athlete of the Week, the conference office announced Tuesday afternoon. Barrow took first in three events and second in another to help the Aztecs win the Mountain West Challenge.

Barrow’s day was highlighted by clearing 20’ 9.25” in the long jump, which is a personal record and the second best mark in Aztec history (Karoline Koehler; 21' 9.50" in 2009). Barrow’s jump is the tenth best in the nation this season and tops in the Mountain West.

"Arguably the best day I've ever had,” Barrow explained after the meet. “I knew it was there, I just had to get the right jump. I'm comfortable when we have meets here [at SDSU]. It feels like practice."

Barrow and the Aztecs’ time of 44.54 in the 4x100 relay was the seventh best time in program history and the fastest in the Mountain West this year.