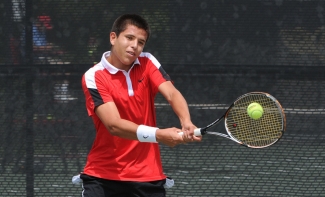 A native of Madrid, Spain, Gonzalez Almazan played at key role in SDSU’s narrow 4-3 upset at then-No. 28 San Diego on Feb. 23, joining forces with senior captain Santiago Cevallos to clinch the pivotal doubles point with a 6-4 decision over the Toreros’ Joel Gamerov and August Holmgren in the No. 2 position. Later in singles, he was the second player off the court after notching a 6-4, 6-3 conquest of David Norfeldt in the No. 5 slot, which gave the Scarlet and Black a 3-0 lead at the time.

Gonzalez Almazan also recorded the Aztecs’ lone point in a 6-1 loss at Pepperdine on Feb. 25 after cruising past the Waves’ Lautaro Pane by a 6-2, 6-1 count in the fifth spot as well for his team-leading fifth victory of the spring. With the result, the SDSU finance major logged the 20th singles win of his young career, improving to 12-7 this season.

With his doubles success, Gonzalez Almazan and Cevallos also remain unbeaten at 3-0 in dual-match play.

Gonzalez Alamazan and the Aztecs will be back in action on Thursday, March 1 when they play host to the California Golden Bears beginning at 1 p.m. Admission to all SDSU regular-season home matches at Aztec Tennis Center is free.