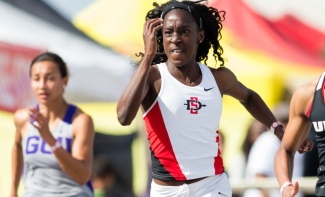 Smith took first place in the 100 meter dash at the Triton Invitational at UC San Diego last weekend. Her time of 11.50 was a personal best and the seventh best time in school history.

It was the first competition of the outdoor season for the senior and her time of 11.50 is the second fastest in the Mountain West so far this season; only teammate Ashley Henderson has recorded a better time, a wind-aided 11.12.

Smith’s time is 17th on the NCAA West Qualifying list and T-55th in the nation.