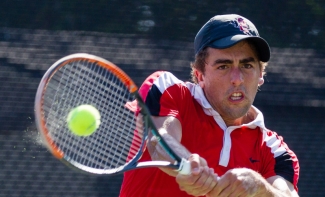 October 1, 2017 (Tulsa) - After posting two victories to open the Saint Francis Health System ITA All-American Championships, San Diego State men's tennis senior Santiago Cevallos (Queretaro, Mexico) came up short in his quest to qualify for the main singles draw Sunday after falling in the round of 64 of the pre-qualifying bracket at Michael D. Case Tennis Center.

The Aztecs also had three players competing in the pre-qualifying consolation bracket, with sophomore Joel Popov (Tampere, Finland) posting the lone victory of the bunch after knocking off Luis Heredia of Marquette in straight sets 6-3, 6-3. However, junior Sander Gjoels-Andersen (Klampenborg, Denmark) was not as fortunate in his encounter with Columbia’s Austen Huang, dropping a 6-2, 6-2 decision, while sophomore Arnaud Restifo (Nice, France) was dispatched by Jack Molloy of California by a similar 6-3, 6-2 tally.

San Diego State will return to Montezuma Mesa next weekend when it plays host to the Aztec Fall Invitational, Oct. 5-8, at Aztec Tennis Center.