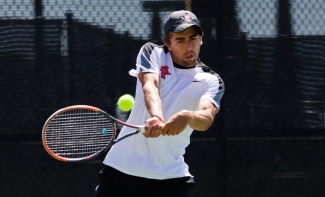 Aztec junior to compete in pre-qualifying round of 64 Sunday

Cevallos emerged victorious in his opening encounter with Christoffer Greve of Illinois State by a count of 7-5, 6-3, before recording another straight-set triumph over Marquette’s Luke Smrek, 6-4, 6-3. With his results, the SDSU senior will battle John Mee of Texas in the round of 64 on Sunday, starting at 10 a.m. CT/8 a.m. PT.

The remainder of the Aztec contingent was not as fortunate, however, with three players falling short in their respective matches. Junior Sander Gjoels-Andersen (Klampenborg, Denmark) came out on the wrong side of a 6-1, 6-2 score against UT Arlington’s Mauricio del Rio, while sophomore Joel Popov (Tampere, Finland) experienced a similar fate in his opening-round clash with Mantas Bugailiskis of Fresno State, dropped a 6-4, 6-1 decision.

The Saint Francis Health System ITA All-American Championships continue on Sunday with round of 64 and round of 32 action in the pre-qualifying bracket, as well as consolation matches.

Pre-Qualifying Singles — Round of 256

Pre-Qualifying Singles — Round of 128