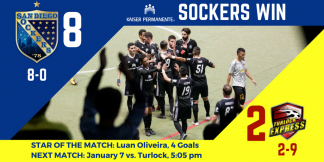 January 5, 2018 (Turlock, Calif.) - The 14-time champion San Diego Sockers tallied six times in the second half to outpace the Turlock Express, 8-2, on Friday night at the Turlock Indoor Soccer Center. Luan Oliveira scored four goals as San Diego remained undefeated (8-0) in the MASL. The Sockers have scored eight or more goals in six of their wins.

Oliveira staked San Diego to a 2-1 halftime lead with two first period markers. The Sockers scored three consecutive goals in the third to extend their margin to 5-1. Brandon Escoto, Erick Tovar, and Oliveira found the back if the net.

Turlock opened the fourth quarter with a score at 1:49 from Ivan Campos to cut San Diego’s advantage to 5-2, but that would be as close as the Express would get for the remainder of the match. San Diego rattled off three more goals, two against the sixth attacker, to put the game away. Cesar Cerda, Oliveira, and Hiram Ruiz finished the scoring.

Goalkeeper Boris Pardo earned his fifth win in goal and dropped his league-leading GAA to 3.00.

The Sockers will conclude the home-and-home series with the Express on Sunday, January 7, 5:05 p.m. at Valley View Casino Center. Gates open at 4:00 p.m.