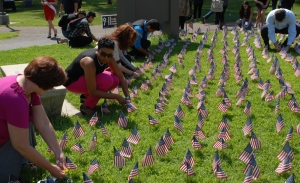 September 7, 2014 (Rancho San Diego) - Cuyamaca Community College invites students and the public to join in a memorial ceremony honoring those who lost lives in the September 11, 2001 terrorist attacks in New York and Washington D.C. that claimed over 3,000 lives.

“On September 11, 2001, terrorists took innocent lives and destroyed our buildings. Their evil actions were unimaginable and they wanted us to give up,” says State Senator Joel Anderson, who will participate in the ceremony.

However, he adds, “we stood up and showed them we were stronger than ever and we would grow from one of the saddest moments that our nation has ever faced. It is important for us to remember the ones we lost in the attack and the first responders who risked their lives to save our friends and family. We need to make sure the next generation learns this part of our history so that they continue to honor the lives that were lost.”

The annual ceremony will take place on Thursday, September 11th at 10:30 a.m. The location of the ceremony is the Grand Lawn at Cuyamaca College (900 Rancho San Diego Parkway, El Cajon, CA 92019).