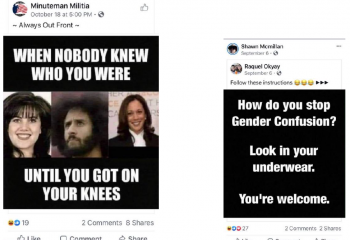 February 26, 2020 (San Diego) ---According to the American Bar Association’s model code of judicial ethics, “A judge shall uphold and promote the independence, integrity, and impartiality of the judiciary, and shall avoid impropriety and the appearance of impropriety.”  Judges are also supposed to refrain from most political activities.

The rules are in place so that all parties coming before a judge can have faith their case will be decided without prejudice based on race, national origin, gender, religion, politics, or anything other than the facts in their case.

But Shawn McMillan, a candidate for San Diego Superior Court, has posted numerous memes on his Facebook page with racist, sexist, anti-Muslim and homophobic themes as well as posts bashing Democrats.