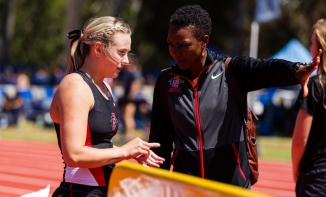 This season, SDSU has had a banner year with Burrell at the helm. She captured her third Mountain West Coach of the Year honor (outdoor, 2014; indoor and outdoor, 2013) after leading the Aztecs to its third MW Outdoor title in five years and its fourth overall. After a successful showing at the NCAA West Prelims, San Diego State secured 10 qualifying spots in the NCAA Championships, the program’s most since 2004. Additionally, her student-athletes have set seven school records this year (60, indoor 200, 60 hurdles, indoor 4x400, 100, 4x100, shuttle hurdles) and took home the school’s first Penn Relays titles: in shuttle hurdles relay and javelin.