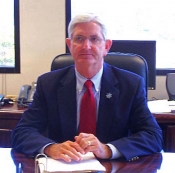 December 27, 2009 (Spring Valley) – The San Diego County Sheriff’s office has opened up a new storefront at 9736 Campo Road in the Casa de Oro neighborhood in Spring Valley. The purpose of the storefront is to “enhance the partnership between the community and the Sheriff’s Department,” according to a release issued by  Sheriff Bill Gore (photo, left).

Sheriff Gore and Supervisor Dianne Jacob were on hand December 21st for the opening of the new storefront, which will be staffed seven days a week.