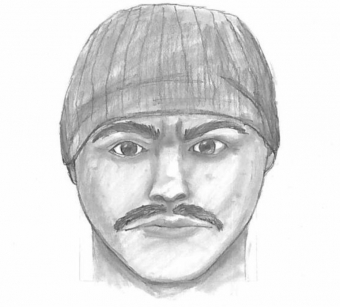 December 4, 2022 (Santee) - Take a good look at this sketch. This man is wanted in connection with an attempted robbery in Santee on Friday, November 25 and for striking two women with the dark green pickup truck he was driving.

Shortly after 10:30 p.m., two women were walking to their car in a department store parking log in the 9400 block of Mission Gorge Road. The women told Sheriff’s detectives that a man struck them with his pickup truck; both suffered minor injuries. One woman told detectives that the suspect then tried to steal her purse before getting back into his truck and driving off, says Detective Amando Rego.

The suspect is described as a Hispanic man between 45 and 55 years old, standing between 5'5" and 5'7" tall and with a heavy build. He has dark eyes and a dark mustache. The suspect was last seen wearing a gray-colored beanie, dark plaid puffer jacket, dark pants and black shoes.

If you recognize this man or witnessed the incident, call the San Diego County Sheriff's Department at (858) 565-5200.

You can also call San Diego County Crime Stoppers at (888) 580-8477. You can remain anonymous and be eligible for up to a $1,000 reward for information that leads to a felony arrest.