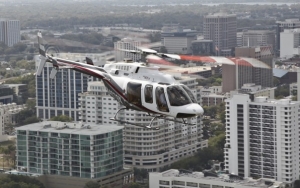 Tuesday, the San Diego County Board of Supervisors approved a request by the department’s Aerial Support to Regional Enforcement Agencies (ASTREA) unit to purchase a Bell 407 GX.

The department identified a need for another helicopter in 2010 due to increased calls for aerial support, and began setting money aside In 2011, the unit had 1,988 calls for service. By last year, those calls had increased notably to 2,425, according to Sheriff’s staff.