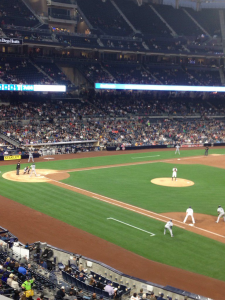 June 1, 2016 (San Diego) - The Mariners traveled to San Diego for the last two games of the split series.  Christian Friedrich started on the mound for San Diego against James Paxton for Seattle.

I guess this wasn't a good game for me to go to.  In the first, Robinson Cano hit a three run homer to give the Mariners a 3-0 lead.

Or did I?  The Padres got a run back in the bottom of the first with Wil Myers’ solo home run, making the score 3-1.  The Mariners committed an error on a double play ball and a run came home and the Mariners led 3-2.  The Padres hit a sac fly to tie the game and later took the lead on an Alexei Ramirez single, 4-3.  Adam Rosales launched a two-run homer to give the Padres a 6-3 lead.

In the second,  Matt Kemp singled in a run and the Padres went up 7-3.

In the fourth, Ramirez hit a two-run shot to give the Padres a 9-3 lead.

Luis Sardinas hit a sacrifice groundout in the fifth to get the Mariners a run back and the Padres led 9-4.

Wil Myers hit a double in the fifth to score Jon Jay and the Padres extended their lead to double digits, 10-4.  Yangervis Solarte singled and drove in a run and the Padres went up 11-4.

In the sixth, Ramirez hit a two-run homer to give the Padres a 13-4 lead.  Wil Myers hit a sacrifice fly and the Padres led 14-4.

In the eighth, the Mariners got a run back on an RBI double from Seth Smith to make the score 14-5.

Chris Ianetta would double in the ninth and score a run, but the Padres took game three 14-6.

Game four is tomorrow at 6:10 p.m.  Wade Miley will be on the mound for Seattle against Colin Rea for San Diego.