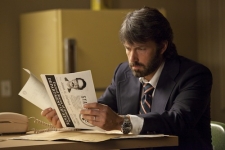 October 12, 2012 (San Diego) -- In the summer of 1993 my family and I went on a road trip through the Midwest.  Among our stops was St. Louis.  As the afternoon began to wind down, we headed for the parking garage.  It started to get overcast.  Shortly after, it started to rain a little bit.  Within seconds it poured like the dickens.  My parents, sisters, and I had to run all the way to the parking garage, but not before we were totally drenched.  We were so sopping wet, we had to change in the parking garage.

Those from the Midwest, or have family there, may recognize the significance of that year.  My family and I happened to be in the middle of what would come to be known as the Great Flood of 1993.

The first fifteen to twenty minutes of Argo are similarly abrupt and intense, only the storm and flood are of an entirely different sort.  The year is 1979.  The setting is Iran, a nation on the cusp of a revolution, the motivation of which is spelled out via narration, photographs, and storyboards.  A horde of irate Iranians surrounds the United States Embassy in Tehran.  A few climb the locked fence.  The embassy panics, its workers scrambling to burn every document.  A pair of bolt cutters enables the protesters to storm the embassy.  Six embassy workers make haste.  The other fifty-plus aren't so lucky; they're overtaken by the Iranians, blindfolded, and held hostage.

The CIA recruits Tony Mendez (Ben Affleck) to rescue the six escapees, who have taken refuge in the house of Canadian ambassador Ken Taylor (Victor Garber).  Mendez, who specializes in disguises and safely extracting people from hostile territories, has a plan: with the help of cynical Hollywood producer Lester Siegel (Alan Arkin) and make-up artist John Chambers (John Goodman), Mendez will fly into Iran pretending he and the six escapees are members of a film crew scouting locations for a fake film called Argo.

Don’t expect to sit back and relax.  Argo is tense.  A few times my lungs felt like an anvil was crushing them because I didn’t breathe.  It is tense from the first frame.  A part of it is Tehran’s uninviting atmosphere, a contemporary version of a Jim Crow era Southern town, where people can get lynched simply on the basis of skin color.  As Tony Mendez drives through the mean streets – which look like they’re twenty years behind the United States in development – he sees a man hanged from a crane for all to see.  Westerners are as welcome as ants at a picnic.

Complementing this unfriendly atmosphere is the agonizingly slow pace during life or death situations.  When Mendez takes the "crew" through town in a van from the Canadian Ambassador's place, the van drives through a crowd of riled-up Iranians.  They surround the van and bang on the windows.  It could get ugly real fast.  During the climactic airport sequence, they must go through three sets of security, the last run by the new military junta.  Imagine going through the languid TSA screening process, anxiously worrying over whether you’ll make your flight, only this time your life is at stake.  The excruciatingly slow pace made me forget the outcome and tense up.

Alexandre Desplat's score makes up the third part of Argo’s suspense trinity.  I didn’t notice it, but I felt its presence all around.  The score recalls the work of former Police drummer Stewart Copeland, whose scores for such works as TV’s The Equalizer were known for their emphasis on percussion.  Desplat’s percussion-heavy score drives the suspense.

Tony Mendez was a hero, although he wasn’t recognized for his role until the mission was declassified almost two decades later.  Sometimes a movie calls for a superman armed with a strength and catch phrase to go with brawn, like John McClane.  Argo is not one of them.  Ben Affleck’s performance characterizes Mendez as a man who isn't in it for the heroics and glory.  He's someone trying to do his job and get six people out of a hostile territory as expeditiously, safely, and with as little disturbance as possible.  When all is said and done, Mendez is an ordinary man, like you and me.

I was disappointed in Affleck's last film, The Town.  Many critics adored it, but I found it lacking in the originality sector.  It could have been written by any serviceable screenwriter and helmed by any competent director with a camera.  Argo is full of the suspense, creativity, and drama that were sorely missed in The Town.  I’ve heard its name bandied about in Oscar discussion.  I don’t know about that, but I have a feeling that it will be mentioned again come December when I write my Best of 2012 column.