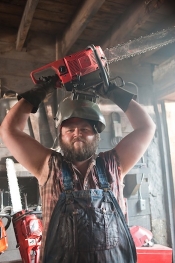 Tucker & Dale vs. Evil is playing only at midnight tonight and Saturday night at the Ken Cinema.

Tucker & Dale vs. Evil not only spoofs these films but also twists the genre more times than a pretzel. Tucker and Dale (Alan Tudyk and Tyler Labine, respectively) are brothers who could pass for redneck mountain men but are just two good-natured people like you and me. They rent a vacation house deep into the mountains. While they make repairs to the dilapidated cabin, they are attacked by a group of scared college kids. Through a series of freak misunderstandings, the bodies pile up as the students try to kill the brothers, but only find gruesome ways to kill themselves.

Tucker & Dale takes a huge risk here. Over the last few decades, the subgenre has evolved to the point where the material is intrinsically funny by itself. It’s almost become a self-parody. In order for a movie like this to succeed and be funny, it not only has to score bulls-eye on every joke but the humor must be turned up to at least an 11. You can’t settle for a 10.

Director Eli Craig (who co-wrote the script with Morgan Jurgenson) overcomes this obstacle. Every gag ranks high on the ambition scale. It's one of those films where you could have an empty bladder and still pee your pants from laughing so much.

The approach to the humor is a simple comedy of errors and misunderstandings. Director Craig frames the student’s POV shots of Tucker and Dale in a way that communicates their lack of the whole picture, their dread, and their fear. The last two elements, satirically and ironically fashioned, never turn serious.

The movie is extremely violent, but it’s executed with glee and an abundance of slapstick. One student dives at Tucker, who is using a woodchipper. But the student falls right into it, creating a gory mess. The action lasts for what seems like a minute but it isn’t milked dry.

Every cliché is bent. There’s the ominous convenience store and gas station. The lighting, framing, and music warn of impending doom. The students’ fear when they see the apparent menacing redneck hillbillies create laugh out loud irony. Those who desire a chainsaw sequence won’t be disappointed with the film’s hilarious twist on the horror movie weapon of choice. What about the obligatory skinny-dipping scene? Craig provides a unique take on that, too.

Craig relentlessly sustains the gleeful and ironic tone and never lets up. The characters may be over the top, but they never ham it up. Most importantly, Tucker & Dale never becomes the movies it spoofs, even during the climactic fight for survival in the sawmill.