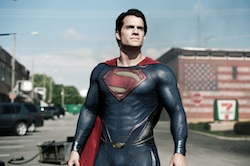 June 14, 2013 (San Diego) – The original Superman was entertaining in the moment, but terribly flawed upon further reflection, especially the ending.  As much fun as I had watching it, the ending was one giant mass of plot holes.  I remember liking the somewhat turgid Superman Returns when I saw it in theaters seven years ago.  Today I can’t remember a single thing about it.  Other than that, I had limited exposure to the silly Superman II.

Man of Steel is overlong.  Even for a comic book film, the performances could have been much better and memorable.  It’s enjoyable, it’s clear the series will get bigger, better and bolder.

Still, out of the small sampling of Superman films, this one gets it the most right.  Quite a grand achievement, I must say, considering the director is none other than Zack Snyder.  I’ve already made plain my distaste of Sucker Punch – perhaps too many times – so I won’t rehash it here except to say it made it difficult for me to give Man of Steel the benefit of the doubt.

Instead of attempting an awkward continuation like Bryan Singer did with Superman Returns, producers and screenwriters David S. Goyer and Christopher Nolan make the logical choice to start anew.  Krypton is nearing its inevitable end.  General Zod (Michael Shannon) and his small militia attempt a failed coup and are punished.  Jor-El (Russell Crowe) sends his newborn son Kal-el to Earth.  Kal-el grows up in Smallville, Kansas as Clark Kent (Henry Cavill), who grapples with his powers and identity crisis.  Now an adult and pursued by Daily Planet journalist Lois Lane (Amy Adams) he now must save Earth from the awakened Zod.

Goyer and Nolan reveal, through flashbacks and interviews Citizen Kane-style, a portrait of a young “man” suffering from perpetual inner anguish.  This first manifests itself in a touching flashback scene in which Kent’s superpowers emerge.  Well, “emerge” is too weak a work.  His x-ray vision, hypersensitivity to sound, and telepathy come on strong like nobody’s business.  Moral issues arise to further complicate things.  Is it wrong to use your superpowers to save a submerged school bus full of drowning kids, thus inviting suspicion, even if that’s the only way?

Before I discuss the aesthetics, I must preface what I’m about to say with a small disclaimer that the screening I attended was a 3D presentation, so the 2D presentation might be different. (There was an option to see a 2D projection on Wednesday – a first in the three-plus years I’ve attended press screenings – but I chose to attend last week’s for transportation and deadline reasons.)  The glasses the ArcLight La Jolla – the San Diego multiplex to go to for mainstream films – handed out were the darkest and dimmest, but a few periodic lifts of the glasses gave me reason to believe the image was overbrightened to compensate.

That said, Man of Steel’s character psychology and philosophy are far from its only grim qualities, as the desaturated colors and shadowy lighting schematics show.  Krypton, a once-prosperous planet, is now a hideous and desolate planet of true despair.  In a way, its self-destruction is a mercy killing.  In the Smallville sequences, the same style brings out a different, yet equally potent effect, this time on an emotional level.  It subtly illuminates Kent’s tortured, confused mental state stemming from his knowledge that he’s not like other kids, but someone – or in this case, something – else entirely.  The second half is packed tight with as much thunderous and ambitious action and fight scenes as one could possibly cram in.  Despite that, it still leaves time and energy to mentally step out and witness Kent’s emotional build-up come into play in his fight against Zod.

Not since the Transformers films have I witnessed so much destruction.  No structure is safe.  Concrete is smashed to bits the same way little kids practice karate moves on Styrofoam.  I’m certain you’ve at some point in your life heard the familiar phrase “pound the pavement?”  The pavement and streets are pounded all right.  After all the destruction, I’d hate to be Metropolis’ Chief Financial Officer.

You won’t find me griping about the relentless action, though.  I draw a distinction between Michael Bay destruction and this kind, which grows out of the story and characters and from that becomes so personal, a genuinely vested interest in the outcome forms.

Zack Snyder is billed as the director.  However, I feel uncomfortable calling it a Zack Snyder film.  Rather, it’s a Christopher Nolan film.  It’s a relief not to see that annoying and pretentious “Zack Snyder Shot.”  It’s that now-tiresome shot that starts at a normal speed, then quickly slows down to enunciate a specific action (such as a punch or jump) before going back to normal.  Apparently, Nolan wouldn’t have any of that.  Indeed, Nolan’s familiar visual style borrows heavily from his Batman trilogy, as his propensity for psychological drama.  Don’t worry, all similarities end there.  After the misguided Legend of the Guardians:  The Owls of Ga'Hoole and the major misfire Sucker Punch, it’s my sincere hope that being under Nolan’s tutelage means Snyder is back on the same path he was when he made 300 and Watchmen.  And hopefully, no more Zack Snyder Shots.

Man of Steel is now playing in wide release.