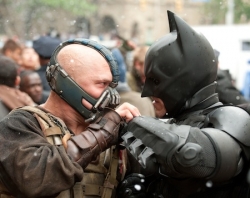 August 16, 2012 (San Diego) – This review of The Dark Knight Rises is one of the toughest I’ve ever written during my tenure at East County Magazine. I spent what seemed like hours trying to figure out how to start writing about one of the year’s most anticipated films. After many false starts, I realized I needed to just get to it.

Christopher Nolan's third, and final, entry in his deservedly acclaimed Batman trilogy is set eight years after the conclusion of The Dark Knight. Organized crime is now nonexistent. Bruce Wayne lives a life of self-isolation in Wayne Manor. His alter ego, falsely blamed (at Batman's insistence) for the death of the revered Harvey Dent, is now reviled by the residents of Gotham. That changes when a new villain emerges in the form of Bane, a hulking super strong human juggernaut, who conducts a reign of terror over Gotham.

Nolan is often revered for his distinct "dark" style, as seen in The Prestige, Batman Begins, The Dark Knight, and Inception. There's David Fincher Dark, which contains heavy dark, but slick and smooth shadows complemented with strong colors. Chris Nolan's style uses lots of shadows and dark colors, but they are usually tinged with a sandpapery roughness.

I expected Batman to get a lot of screen time. In the end, however, I estimate the Caped Crusader appears only in about twenty to thirty percent of the film's two-hour and forty-minute runtime, maybe even less. While I was surprised, Christian Bale's tortured and vulnerable performance as Bruce Wayne gave me no reason to complain. At the beginning, he gives Wayne a slight touch of Howard Hughes during his reclusive years, minus the bottles of urine, unclipped nails and hair, and eccentricity. Later, after Bane imprisons him, I could feel his inner agony and mental anguish.

This spills over into Wayne's Batman persona. Most representative of this is his first meeting with Bane, who proves to be far too formidable. He thrashes the severely overmatched Batman. Unlike many modern Hollywood "fight scenes" - which are nothing more than third-rate martial arts aided generously by CGI - this sequence is brutal. No theatrics, no fancy stuff, no forced editing. The punches land with heavy thuds, the combatants grunt and groan, and everything unfolds organically.

This slams wide open the door for Bale to deliver one of The Dark Knight Rises' most emotional moments, Batman at his worst. Watching him lose made me feel pity because it's pathetic how far he's fallen. He's lost his touch. What hope is there now for the citizens of Gotham?

As I mentioned before, Bane is a massive human juggernaut. His booming, half-artificial half-human, voice emanates from a mask covering most of his face. Every time he speaks the floor vibrates. His extremely bulky, yet human muscular build makes Bane a genuinely imposing and unstoppable villain. He’s not unlike the Incredible Hulk (the Lou Ferrigno Hulk, that is), only he isn’t green.

Wally Pfister's apocalyptic cinematography is virtually colorless, the exteriors saturated in a gritty, urban gray. The production design starts out peaceful and clean, like skillfully shot postcards of Manhattan. Then it transforms Gotham City into an utterly bleak and ruinous shell of it's former prosperous self.

Watching The Dark Knight Rises is like reading the end of an epic graphic novel.  I remember reading an interview Nolan did shortly after the release of The Dark Knight in which he expressed reluctance to continue the franchise.  He cited X-Men 3, Spider-Man 3, and a few other weak third entries.  I'm glad he made this movie for several reasons.  Without The Dark Knight Rises, there wouldn't be closure. It's one thing to leave audiences wanting more, but here it's like writing the first two acts of a screenplay but filming it without a third.  Which brings me to the second reason, and that is narrative approach.  It is not concerned with trying to top The Dark Knight, which would be like trying to eat a bowl of tomato soup with a fork.  Nolan spends a lot of time wrapping up the franchise amid the destruction and terror.  The experience is like saying goodbye to a good friend you won't see again.  But someday, somewhere Warner Bros. will come up with a new series of Batman films, and it's my hope the next set will share the same thrills, story depth, and class as Nolan's films.