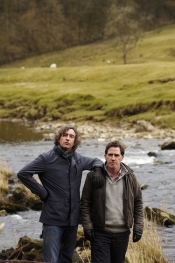 July 9, 2011 (San Diego) – The Trip is a Reader’s Digest condensed version of the hit British TV sitcom of the same name. Normally sitcoms and cinema go as well together as peanut butter and mayonnaise. Director Michael Winterbottom reverses this trend with a film that makes a smooth transition from the small screen to the big screen.

British comedians Steve Coogan (Hamlet 2) and Rob Brydon play versions of themselves. Steve is a restaurant critic (eat first before seeing this movie) who is also a character actor seeking a breakout role. He is about to embark on a seven-day tour of Northern England’s finest restaurants when his girlfriend (Margo Stilley of Winterbottom’s 9 Songs) bails on him for a writing job in the United States. He then asks his friend Rob to accompany him.

The movie is heavy on the dialogue but it never gets too talky. The dialogue is improvised, which explains why it sounds so natural. It sounds more like real speech as opposed to reel speech. It’s refreshing to hear discussions about life told the way real people would tell it. The two actors also have great timing, especially when they have dueling Michael Caine impersonations.

The film avoids quirkiness, preferring dry humor. Those expecting a tone along the lines of Planes, Trains, and Automobiles or a slapstick road trip movie will be underwhelmed by The Trip’s subtle, understated comedy. I laughed a few times but they were small and gentle laughs, not guffaws.

An inherent risk of dialogue-driven movies is the danger of audience disinterest. It takes more than a way with words and charismatic performances to keep an audience engaged. Movies are a visual medium. I’ve seen films with nothing but great dialogue eventually go limp because they don’t have a visual hook to go along with it.

The visual hook in The Trip is the editing. It’s also the key to its success. The cutting has an unpredictable rhythm. Winterbottom doesn’t cut too fast or too slow, nor does he feel obligated to vary the lengths of each shot to prevent each scene from getting visually stale. The rhythm keeps each scene and each line of dialogue flowing.

This rhythm is evident in a scene when Steve and Rob are driving. The first third of the scene has four different shots. There’s a two-shot from behind the front seat, a one shot each of Steve and Rob and an extreme wide shot of outside their car.

This editing is why the movie held my attention. It makes the alternation between the shots of the actors nonrepetitive and the movie avoids monotony. It also gives a visual structure to each scene.

Although pared down to one hour and fifty-one minutes from its two hours and fifty-two minute length, I don’t feel deprived. The movie does get a tiny bit tedious after a while but the writing, performances, and editing managed to grab my attention. The length is just right. Although I intend to seek out the original TV series, I’m satisfied with this movie.

The Trip is currently playing at the Landmark Ken Cinema.